From the New Camaldoli Hermitage I headed south to spend the weekend with good friends in San Luis Obispo before pointing east towards Arizona where I was to perform at St. Luke’s Episcopal Church in Prescott on Tuesday, April 28. 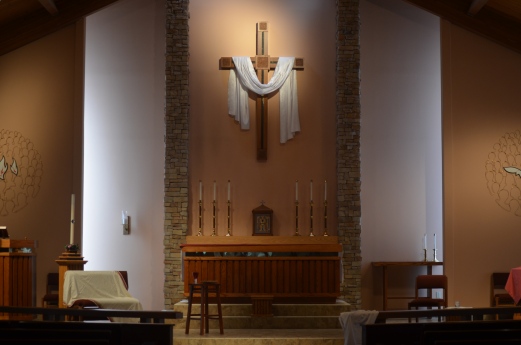 As you can see, the sanctuary is very wide and open providing great spaciousness to move about and perform in.  A good number of people came – some from other churches – and afterwards were very appreciative.  At least a couple of people where following along in their Bibles which, I have to say, I find quite distracting – I find myself being aware that they are following along and can become overly conscious of making mistakes which, of course, results in making mistakes!  Partly, it’s because I don’t know why they are following along – perhaps to see if I really do know it!  Perhaps it’s just that they find it easier to retain their attention if they have to focus on the text.  However, it is the presence of the written text that I am trying to dissolve, if possible, to bring a more immediate experience of the story.  I found out afterwards that at least one of them was following along in a different version of the Bible!  In a way that’s not so bad – at least they may not know where I am departing (intentionally or otherwise) from the NRSV!  It would be a bit like when I saw Anthony Holland recite Mark’s Gospel from the KJV and of course I was following along in my head with the NRSV – interesting to have that simultaneous comparison of the two (but I could also see where he missed bits out or departed from the text!).

A number of people ask me how learning Mark’s (and John’s) Gospel has impacted my own spirituality.  This is a recurring question, and it is a good question.  It is a question that perhaps I will be able to answer more fully and more clearly when I have completed the present tour.  It certainly doesn’t mean that I understand Jesus any better, if anything it is the reverse – now that I have a fuller awareness of what he said I am more conscious that there is much that is perplexing.  Sometimes, and in some traditions within Christianity, it is easy (and encouraged) to create and buy into the illusion that Jesus is our “buddy” and we over-familiarize the divinity and the mystery out of him.  I think that for some of the hearers of these performances they have found parts of it quite shocking – have found Jesus quite shocking, not quite as comfortable and comforting as they had come to think.  Perhaps for me and my hearers (but for me especially) there is a sense in which Jesus (and the God-in-Jesus) has to become remote and strange in order for a new understanding, a new relationship, dare I say it, a new intimacy to develop… We will see.

So I am now heading for Oklahoma and Texas where I have a whole clutch of performances (and sermons!) in close succession.  This weekend will be particularly full: performing at St. Philip’s in Ardmore, Oklahoma on Saturday then preaching at all three of their services on Sunday morning and reciting the Gospel reading (from John!), then I will be performing Mark at St. Stephen’s Episcopal Church in Sherman, Texas that afternoon at 3pm.  Then Flower Mound on Monday, Rockdale on Tuesday, Llano on Wednesday, Austin on Thursday and then a break on Friday before Port Isabel on Saturday.  This should be interesting!